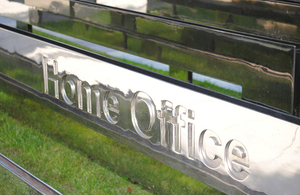 Innovative reforms to immigration detention in the UK were announced by the Home Secretary Sajid Javid today, Tuesday 24 July.

The announcement comes in response to Stephen Shaw’s second review of the government’s approach to vulnerable people in immigration detention which looks at progress the government has made since his first report in 2016.

The measures announced include commitments to work with charities, faith groups, communities and other stakeholders to develop alternatives to detention, strengthening support for vulnerable detainees and increasing transparency around immigration detention.

The Home Secretary also announced that he would review how time limited detention works in other countries, to build an evidence base to better inform the debate in the UK. And while currently detainees have an automatic bail hearing every 4 months, the government will pilot an additional bail referral after 2 months.

Detention is an important part of the immigration system – but it must be fair, dignified and protect the most vulnerable.

We have made significant improvements to our approach in recent years, but it is clear we can go further.

Under these reforms, we will work with our partners to develop alternatives to detention. We will also improve support for the most vulnerable, introduce a new drive on dignity in detention and be more transparent.

My ultimate goal is to ensure that our immigration system – including our approach to detention – is effective and humane.

The Home Office has already started working with the United Nations High Commissioner for Refugees to develop new pilot schemes, including an initial one to allow vulnerable women to be managed in the community, where they would otherwise be liable for detention.

UNHCR appreciates the increased efforts to review detention use in the UK, including the work of Stephen Shaw on the treatment of vulnerable detainees.

We welcome the recent reduction in the use of immigration detention, and encourage the Government to continue this trend. Community-based, case management alternatives provide an effective means of resolving immigration and asylum cases without detention.

UNHCR is grateful for the Home Office’s commitment to introducing alternatives to detention and will seek to intensify collaboration in this area. This work should help further reduce the use of detention, and provide better support and outcomes for those stuck in the immigration system.

To increase support for vulnerable detainees, the Home Office will amend the Adults at Risk policy so it differentiates more strongly between cases to make sure those with the most complex needs receive the right attention and care.

Finally, the Home Secretary has committed to publish more data on the immigration system. Alongside this, he is commissioning a new annual report by the Independent Chief Inspector of Borders and Immigration to assess progress on the adults at risk policy.